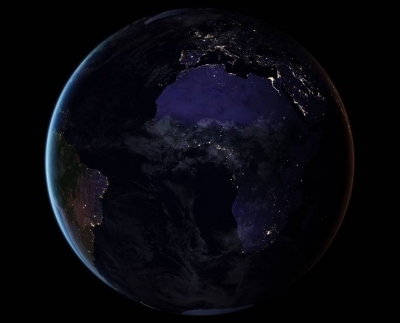 Night sky over the African continent

April 3 – Germany’s 1,850 stationary facilities, covered under the EU Emissions Trading System, emitted about 363 million tonnes of CO2 equivalents in 2019, a drop of 14% year-on-year. “The noticeable drop in emissions reflects the successful reform of the EU-ETS, which has led to significantly higher CO2 prices,” German authorities commented. Overall, EU ETS emissions fell 8.7% (excluding aviation) to 1.5 billion tonnes, with Germany contributing to 41% of that decrease.

April 2 – JERA, Osaka Gas and JXRC have started to produce up to 1.1 million tons of city gas in Kawasaki city by blending natural gas and liquefied petroleum gas. JXTG and JERA announced they will also use the city gas as a raw material for hydrogen production.

March 31 – Endesa has created a 25 million euros ($27.8 million) fund to help fight the coronavirus pandemic in Spain. The Spanish utility, subsidiary of Enel, said the fund will be designated for purchases of protective equipment for health-care workers.

March 30 – OxGas has commissioned MAN Energy Solutions to act as ‘owners engineer’ to develop and build a liquefied methane-based fuels terminal in the Swedish Port of Oxelösund. The terminal will feed both LNG and green methane derived from bio gas to SSAB ’s local steel production, and to re-distribute it via train and trailers to other parts of Sweden for use in the steel industry and decentralized power generation.

March 27 – North America’s independent system operators (ISO) are considering delaying investments in grid upgrades and enhancement as electricity demand weakens due to industry shutdowns to contain the coronavirus pandemic. PJM Interconnection, the largest U.S. bulk power market which spans 13 Mid-Atlantic and Midwestern states, revised its daily forecast of about 100,000 MW of load but actual demand came in at 95,500 MW.

March 26 – The Finish technology group Wärtsilä has initiated combustion trials using ammonia in an effort to reduce emissions. Based on initial results, the tests will be continued on both dual-fuel and spark-ignited gas engines, followed by field tests in collaboration with ship owners from 2022, and potentially also with energy customers.

March 25 – Xodus Group has stepped up services related to subsea power cables over the last twelve months. The number of new consulting assignments grew by more than 50%, resulting in more than 70 active work streams that are handled by more 30 permanent staff.

Electricity “more indispensible than ever”

March 24 – Disruptions caused by the coronavirus crisis lay bare how much modern societies rely on electricity, according to the International Energy Agency (IAE). Millions of people are mandated to stay home, causing a surge in teleworking, e-commerce and video streaming which pushes up domestic electricity use.

March 23 – Sharp cuts in capital spending among Appalachian gas producers are now being replicated in other U.S. basis, with Energy Aspects anticipating the deepest impact on production and earnings to take place starting from the second half of 2020. So far, E&P companies just hedged 52% of this year’s expected production even though some Appalachian producers are seen “lock in some pure gas volumes at prices above the curve.”

March 20 – Electric vehicles (EVs) remain particularly exposed to the corona effect of supply-side constraints and demand erosion. Gigafactory facilities are likely to be delayed and fledging EV manufacturers could face bankruptcy, Wood Mackenzie warns. On the flip side, declines in EV sector demand may be gains for the stationary energy storage segment.

March 18 – Corona-struck Italy has seen demand for natural gas plunge 8% from the previous week, with similar declines likely in other EU countries as national governments impose lockdowns to contain the virus. Industrial demand is “particularly volatile,” while gas generators will bear the brunt of demand loss, Wood Mackenzie says, as a carbon price decline is bolstering thermal coal.

March 17 – Nexif Energy, a joint venture between Singapore-based Nexif and Denham Capital, has raised project financing for the Rayong gas-fired cogeneration project in Thailand. The 92 MW plant is being developed project with Ratch Group, based on 25-year power purchase agreement with Electricity Generating Authority of Thailand (EGAT).

March 16 – The Asian Development Bank (ADB) has agreed to provide $10 million in debt financing for a gas-fired power unit in Mazari Sharif with a capacity of nearly 60 MW. Phase-1 of the Independent Power Project (IPP) will get another $10 million loan from the Leading Asia's Private Sector Infrastructure Fund (LEAP).

March 13 – Analysts at the U.S. Energy Information Administration (EIA) have drawn up the 50% Carbon-Free Generation case - assuming a stark shift in state-level policies. In this event, the U.S. would have 19% more nuclear power generation, 10% more wind power and 17% more solar PV contribution than in its Annual Energy Outlook 2020 (AEO2020) reference case.